The long-awaited Austin screening of Tomlinson Hill has a date and a location: Thursday, August 21st at the Carver Center. Chris’ new book will be hot off the presses and we couldn’t be more excited to share it all with you. Put it on your calendars and more details to follow!!

St. Martin’s has started sending out galleys of Tomlinson Hill to reviewers. This scares me a little because these are uncorrected proofs, which means they are chock full of typos and layout mistakes. The most terrifying is that they spelled LaDainian’s name wrong on the title page. But we have since fixed those things, and I am told reviewers will not judge the book on typos when reading the galleys.

Here’s an image of the stack I’ve got to send out in the next few days. 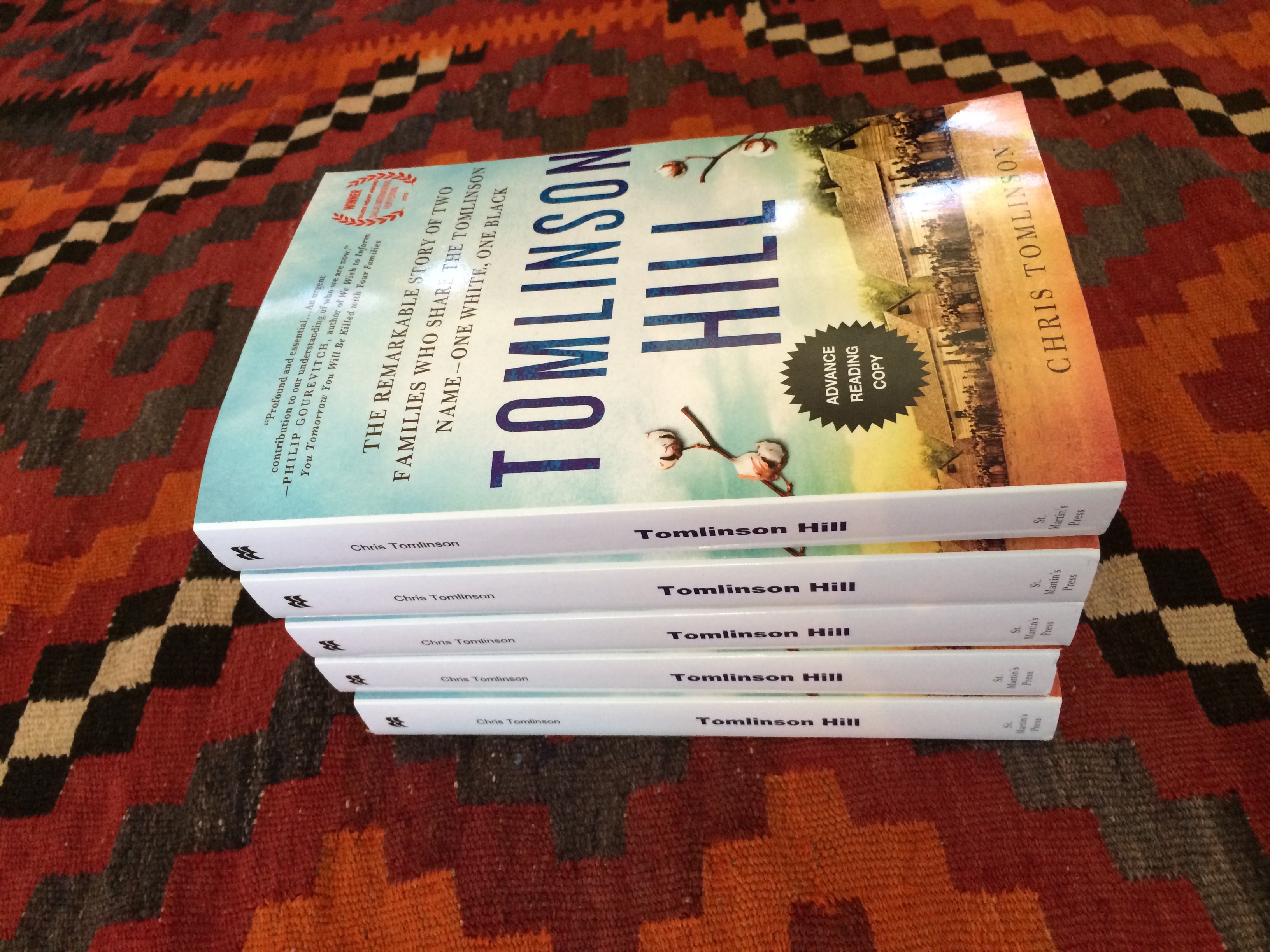 I also have the first dates of the book tour booked!

Dallas on July 29 at Barnes and Noble, though not sure which one yet.

Certainly look for more emails blasts, tweets, Facebook posts and blog entries as we get closer to the dates. Don’t worry, I will try to make sure you don’t forget.

And as always, order lots of copies! Here’s a link back to my post on where to pre-order. If I want to get another book contract, this book needs to sell. I promise everyone freebies on the next book if you buy this one!

We’re excited for the Junior League presentation of Tomlinson Hill tomorrow night (March 26th) in Dallas. Here’s the details if you’d like to join us! Chris and I will be in attendance for a post-screening Q&A. http://dallasfacesrace.com/events/junior-league-tomlinson-hill-screening/

Tomlinson Hill Available From These Stores 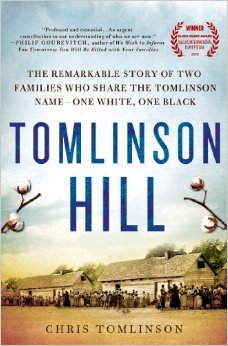 Tomlinson Hill is available for pre-order! I’ve included several links below to the more popular online book stories, but if you live in a town with an independent bookstore, you can do that bookstore and me an extra special favor by calling them up and making sure they order some copies for their shelves too.

The shipping date is July 22. For anyone who knows a book reviewer, send me your contacts and I’ll get those in the mail.

Clearly, the goal here is to sell as many books as I possibly can, so please consider buying extra copies and sharing them as gifts, or donations to your local library or school libraries. I am always grateful for your support, but I am equally convinced everyone can learn something from this book, particularly now that Americans appear ready to think about these things.

We’re proud that to be included with so many other great documentaries, including The March and Faith in the Hood.

The Book Cover for Tomlinson Hill is Out

Ladies and Gentlemen, I am happy to reveal the cover for the book, Tomlinson Hill: 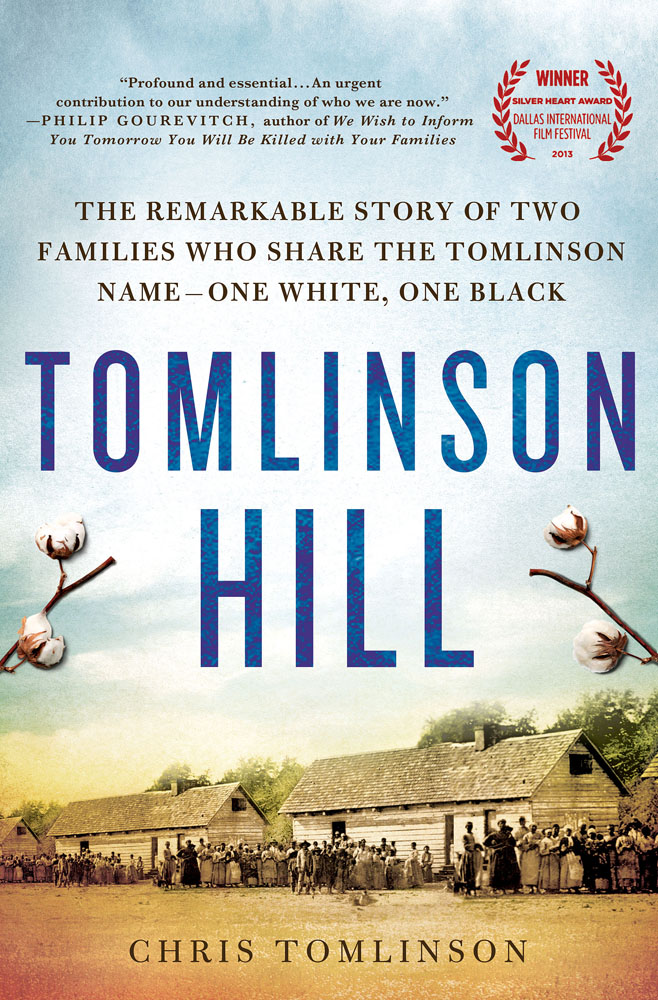 Everyone grows up knowing that one should not judge a book by its cover, yet that’s what most people do. So the cover needs to communicate a lot of information with a single glance. The designer decided to let the reader know right away that this is a book about American slavery, and of course, they should know we’re telling a remarkable story about two families who share the same name.

We’re also proudly flying the laurels won by the film Tomlinson Hill. I am keeping my fingers crossed that the book will get its own recognition, but that will come after the release.

Philip Gourevitch, an old friend from Rwanda, graciously provided a blurb that I hope will tell the reader this isn’t only about the olden days. This is a book about the United States of America today, and why yesterday still matters.

All in all, I’m pretty happy with it.

We are getting closer to the launch date, and I have finished going through the copy-edited version. For those who read an early draft, you’ll be happy to know the book is in great shape and much, much shorter than the first draft. I didn’t get to squeeze in as much as I would have liked, but I think it reads much better now.

We don’t know exactly when it will be on shelves, but that should be resolved in the next few weeks. I’ll let y’all know as soon as I do.

Questions, a Photo and a Confession

We screened the film Tomlinson Hill recently at Baylor University in Waco, and I was thrilled to see so many people from Marlin present. Afterward during the question and answer period, Lisa Kaselak and I got some hard questions about the choices we made in the film, all of them very thoughtful. One woman questioned whether we should have been more specific about how far Marlin is from Tyler, where we filmed an Aryan Nations rally. The answer is that the film is showing nationally, and most people viewing it outside of the state do not see much of a cultural difference between Marlin and Tyler. Another Marlin resident asked whether our film was making a meaningful contribution to the community, since much of the funding came from non-profit arts groups. All I could reply is that we have yet to make any money on this project, and the arts are a valid way to start a conversation and ultimately bring change to Falls County. Outsiders have offered dozens of economic development opportunities over the years, but until Marlin comes together as a single community, none of them will make any real difference.

One woman from Chilton arrived bearing a photo of my Great, Great, Great Uncle Augustus Tomlinson. Augustus was REL’s older brother and helped raise my great grandfather after their father James K. Tomlinson died in 1865. I will forever be grateful to Cynthia Montgomery for sharing this with me and allowing me to include it in the book. The photo was taken with Augustus’ wife Elizabeth Jane Landrum Tomlinson outside their house in Lott. 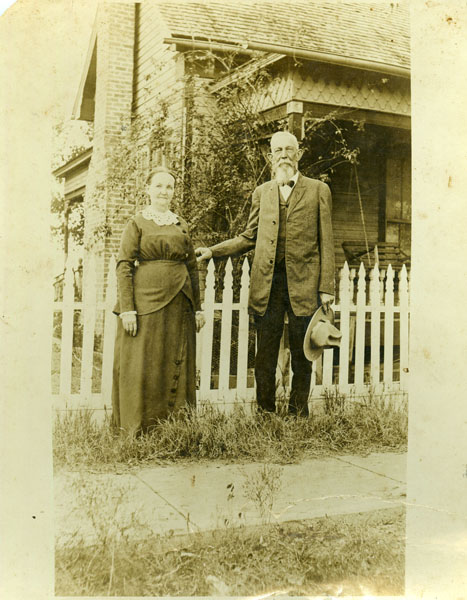 A few Falls County residents lingered afterward to talk about race and racism growing up in Marlin. One woman told me that she’d been researching the history of Lott and had learned that the Tomlinsons had freed their slaves in Alabama, and the African Americans who came with my family to Texas were volunteers. She explained how this showed the Tomlinson’s enlightenment about race. I can’t count how many times I’ve heard similar stories told both by my relatives and other whites who trace their families to slaveholders. I was eight years-old when my grandfather told me how the former slaves loved us so much that they took our last name. I allowed this older woman a chance to finish this latest revelation about my family and took a deep breath before telling her it was a lie.

The 1860 slave schedules compiled by the Census clearly show that James K. Tomlinson owned the African Americans who worked on his plantation. The Census also shows no free blacks in all of Falls County. The African Americans living in Falls County were slaves until June 19, 1865 when Union troops took control of the state, thereby ending the Civil War. The woman, whom I prefer not to name, insisted that the oral history she had collected was true, and that she was including it in her book about the history of Lott. I told her that I was happy to share all of the documents I’d collected and I sympathized with her since I’d also heard similar fairy tales to cover up the crimes of my ancestors. I assured her that while the descendants of 19th century Tomlinsons may have believed the stories they were told, our ancestors were anything but enlightened. She said she would not change her book to reflect this newly revealed fact, she was sticking with what her sources told her. After all, look how sweet the couple in the photo above look.

Another woman told me about growing up in Falls County in the 1950s and 1960s and the segregation that kept white and blacks apart. She recognized how destructive and oppressive that policy was for all involved, and she condemned it and the racism of her youth. But before long she admitted that when she saw her teenage daughter spending time with African Americans her own age, she got upset. She said all of that training from her childhood still controlled her emotions. She even told her daughter that the parents of the black teens would be equally upset because they understood what a bad idea it was for the races to mix. This woman said her daughter laughed at her, told her that times had changed that she needed to change too. This woman told me it was hard to change after so many decades of seeing the world in a certain way. Her last words to me before she left the theater were, “I’m working on it, I really am. I’m working on it.”

This woman sums up what I believe is happening in America today. We know that racism is wrong and no one seriously argues that blacks are inferior. Yet so many Americans still feel the residual affects of our racist history. And like the amateur historian, the truth makes us uncomfortable, so we either deny it or we rewrite history. We all know that racism is wrong, so we adamantly denounce it while failing to seriously consider what the word means or how it manifests itself. Too many people think that condemning the Ku Klux Klan is all it takes to not be racist when it really involves so much more.

I’m not naming the woman who admitted to me that racism still influences her because she deserves some privacy to overcome these deep-seated emotions. I would also never call her a racist, because she knows its wrong and wants to overcome it. But like far too many white Americans, racism still shapes her world view. I admire her for owning up to it. I wish more people would.

Thanks Stephen Sloan, our project advisor, champion and archivist of the oral histories captured to make Tomlinson Hill; hugely important in their own right, made even more so with the passing of three of the project participants. They are the last voices of this history…

Looking forward to connecting with other women filmmakers tonight at the Dallas Women in Film Spotlight Series, where I’ll be talking about Tomlinson Hill. If you are a WIFD member, registration is free. Come on by! http://www.wifdallas.org/Default.aspx?pageId=947407&eventId=755065&EventViewMode=EventDetails